DHL Parcel has embraced a unique concept by committing to the Dutch national women's teams football, hockey, handball and volleyball. Under the name #SameDream, the four sports associations and DHL want to realize their ambitions together.

"The idea of further loading the DHL brand through sports sponsorship has been around for some time," says Michel Clausing, CCO of DHL Parcel Benelux. "Spring 2021 became concrete. Together with sports marketing agency Triple Double, we mapped out the sponsor landscape and looked at which propositions would be appropriate, and available. In recent years, the global DHL brand in particular has been pushed forward. DHL is a very strong brand, but at the same time somewhat businesslike and distant. Our origin in the Netherlands lies with Van Gend & Loos and we have been here for 225 years. That Dutch origin had to be reflected in the proposal, because we want to bring our Dutch map a little closer to the consumer."

"WITH THIS WE WANT TO TOUCH THE DUTCH CONSUMER'S HEART."
Paul van den Acker, Director Marketing & Communications at DHL Parcel

At Triple Double there was an earlier idea from Sven Rouwenhorst (Business Developer at the Dutch Handball Association) and Nicole Bekkers (Head of Partnerships & Business Development at the KNVB) for a joint sponsor proposition of various sports associations for the women's teams. The idea appealed and after several discussions, DHL finally came up with a collaboration with four sports associations (KNVB, KNHB, Nevobo and NHV) and the Orange women's teams proposition.

"With the choice of the 4 federations, we have managed to bind the absolute top of the Dutch women's team sport to us," says Paul van den Acker, Director Marketing & Communications at DHL Parcel. "We have always spoken to all four unions together. When it was broadly clear what the four unions wanted and what we wanted, we finally organized one day where everyone was present. At the end of the day we were out together. This made the partnership very transparent. We never received a signal that there would be disagreement between the four unions, or that there was one union that wanted to profile itself more in the negotiations than the other. Of course you sometimes have one-on-one conversations, but that is specifically about a certain effect."

For DHL, the cooperation with the four sports associations is a logical story. "If you put the DNA of DHL Parcel on the DNA of the women's domains at the various unions, you see many parallels," says Van den Acker. "This partnership is a great way to touch people personally across the axis of women's sport."

Clausing: "These are four teams that have grown enormously in recent years and have ensured sporting successes. This is a parallel between DHL and the four unions. In 2014, we were at the same level as these women's teams in sports, with the exception of the hockey ladies. The journey they have made to who they are now, we have also made. Now we are going to take the extra step together with #SameDream. And that ultimately also applies to the hockey ladies. Of course, they have been at the top for some time, but they also want to stay that way. And they also want to inspire girls to realize that same dream."

"WE WANT TO SIGNIFICANTLY INCREASE OUR MARKET SHARE IN C2C. THAT'S WHAT THIS SPONSORSHIP IS AIMED AT."
Michel Clausing, CCO at DHL Parcel Benelux

The awareness of DHL in the Netherlands is already at a very high level. That is not the main reason that DHL enters into the partnership. The main challenge is to ensure that consumers have a preference for the DHL brand. Van den Acker: "We have always been very strong in the business market, but our question is how we can conquer the consumer and private market in the coming years and ensure that the consumer chooses DHL when you want to send a package. We have built up a very strong position in the business market in recent years, now we also want to make steps in the consumer market.  In the future, you will increasingly see at webshops that you can make a choice by whom you want the package to be delivered. A number of webshops are already doing this. Or which delivery person do you use when you send something via Marktplaats? We want to get the likeability and the emotional connection with the DHL brand to a higher level in the next four years. With this we want to touch the heart of the Dutch consumer."

Originally, DHL was primarily a B2B company. That has changed in recent years. DHL Parcel is now the second largest carrier in e-commerce, with more than 250 million packages from webshops that are delivered to Dutch households every year. "The next step is a stronger position in the C2C market: the private individual who sends a package. That is why this partnership for DHL fits the company much better now than it did a few years ago," says Clausing. "We want to significantly increase our market share in C2C. That's what this sponsorship is aimed at. If you then look at the distribution and diversity of the members of these four unions, you see a perfect reflection of Dutch society. With this proposition we reach a large part of the Dutch sportswomen between the ages of 15 and 45, who are generally also the online shoppers. With these four sports you come into contact with 2 million people. So that can have a huge effect."

With the focus on the women's teams, more diversity can be an important part of the collaboration. Clausing: "We do want to hire more female staff, but it is not the main goal of this partnership. At the distribution centers, the diversity is reasonably in order, but among the delivery drivers, the majority is still male. We work together with our HR department to see how they can use the partnership. This is not the party of the marketing department, but the whole of DHL must reap the benefits of this and be able to use it."

In communication, DHL becomes the official logistics partner of all four unions, both for men and women. In addition to a financial contribution, there is also a 'value in kind' component in the contracts, whereby the four unions can purchase services from DHL and DHL takes care of the transport of materials to and from competition locations. All four contracts with the unions have the same term of four years and are at about the same level as far as the sponsor fees are concerned. In general, the rights and obligations are in line with each other, but there are some differences in the effect. For example, the name DHL, incidentally without the addition Parcel, will only appear on the shirts of the handball and volleyball players. In hockey and football, that was not possible. "You know in advance that this has been blocked," says Janske Delmee, who, as Sponsorships Manager, takes care of the partnerships at DHL.

(Text continues below the image.) 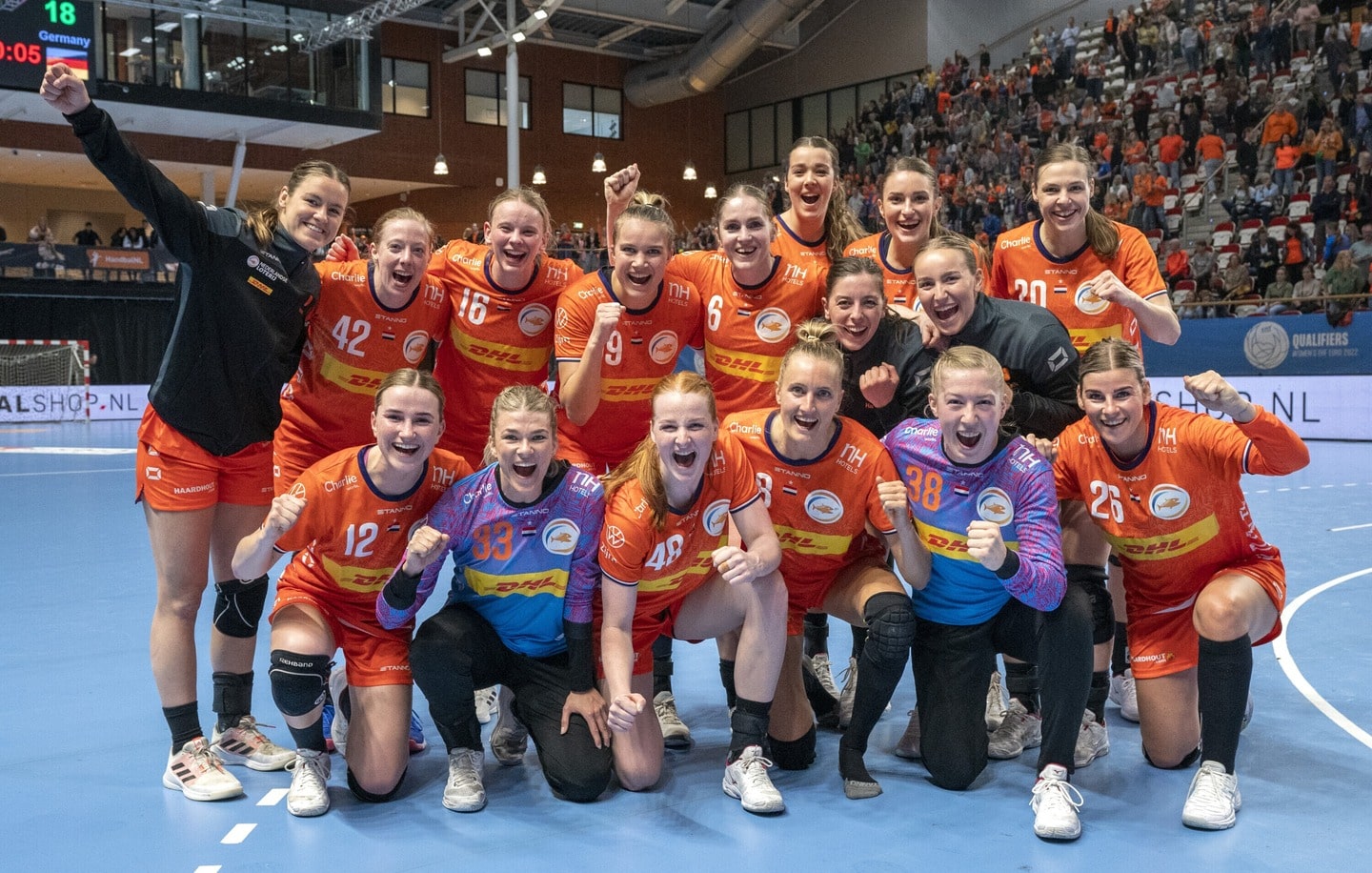 "Football and hockey are sporty and in the organization maybe a bit further than handball and volleyball, but that hopefully also results in spin-offs. The starting point is always #SameDream. We will use that via the socials and will also be on the boarding around the field in our expressions. If we are going to do advertising, it will always be together with the four sports associations. For example, if you are present at hockey, you will also learn that DHL is a sponsor of the other three sports. The cross-connections make it surprising.

It is striking that corona has not caused the cooperation to be delayed, but rather brought forward. "Due to the acceleration in the e-commerce market due to corona, this proposition came two years earlier than we first intended," says Clausing. "It was planned for the years 2023-24. Covid has created winners and losers, and we are one of the winners."

"THIS WILL BE THE DHL SPORTS SUMMER."
Janske Delmee, Manager Sponsorships at DHL Parcel

The fact that the partnership has already been concluded means that DHL can at least make full use of a number of major sporting events in 2022. In July the UEFA Women's EURO takes place in England, also in July the Hockey Women's World Cup in the Wagener Stadium in Amsterdam, from 23 September to 15 October the Women's Volleyball World Cup in the Netherlands and Poland and the European Women's Handball Championship takes place in November. "It will be the DHL sports summer," laughs Delmee. "There will be matches and tournaments all year round in the coming years. In the campaign calendar, we can set up activations with the four sports throughout the year. And then in 2024, of course, there will also be the Olympic Games in Paris!"

The only hesitation there has been recently is whether now, with the war in Ukraine, it is the right time to announce such a partnership. The first announcement even had to be postponed for a few weeks because volleyball player Laura Dijkema, playing for the Russian club Leningradka from St. Petersburg and one of the ambassadors of the partnership, could not yet fly back to the Netherlands.

In order to take DHL parcel's employees and customers into the ups and downs of the athletes on their way to their successes, one of the players of each team acts as an ambassador; these are Laura Dijkema, handball player Lois Abbingh, hockey player Pien Sanders and football star Jackie Groenen. "We have submitted to the union who would best qualify for this," says Van den Acker. "They have the knowledge who can best bring this partnership across the stage. We are a fairly authentic company, so we have asked to come up with four ambassadors who fit in with that and want to propagate that. We are very happy with all four women. As DHL, we want to be as close as possible to the teams and their story, but if they tell the #SameDream story, that is of course much stronger than if we do. The players also have the feeling that this is such a unique story, that it had to happen. It is proud that such a large international group, which until then was not actually active in the Netherlands, has now become the main sponsor."

This article first appeared on Sponsorreport.