Today, DHL Parcel opened the largest and greenest parcel sorting centre for the Benelux at the sustainable Business Park De Wildeman in Zaltbommel. The sorting centre will process up to half a million parcels per day that can be sorted to 240 locations. These include DHL's 140 CityHubs and 21 sorting centres in the Benelux and destinations in all countries of Europe. This enables late delivery times for shippers and webshops, who can deliver until 10:00 in the morning for same-day home delivery throughout the Netherlands.

The DHL Parcel Hub Zaltbommel, as the name officially reads, has been realized according to the BREEAM Excellent criteria for sustainable buildings. This concerns both the materials used and the exploitation. For example, 2.5 million kWh of electricity is generated per year, there is no gas connection and geothermal energy is used. The construction involves an investment of 84 million euros;

DHL's largest investment in the Netherlands to date. It also underlines DHL's position as market leader in the business market and major second player in the e-commerce market. DHL's growth, both in the e-commerce segment of online shopping and in the business segment, made the capacity expansion much needed. The volume growth, which is written in double digits, could always be well absorbed. After the opening of the new hub in Amsterdam in 2018, this expansion can further facilitate growth. In addition, the CO2 footprint of the processes is reduced by the efficient and modern equipment. 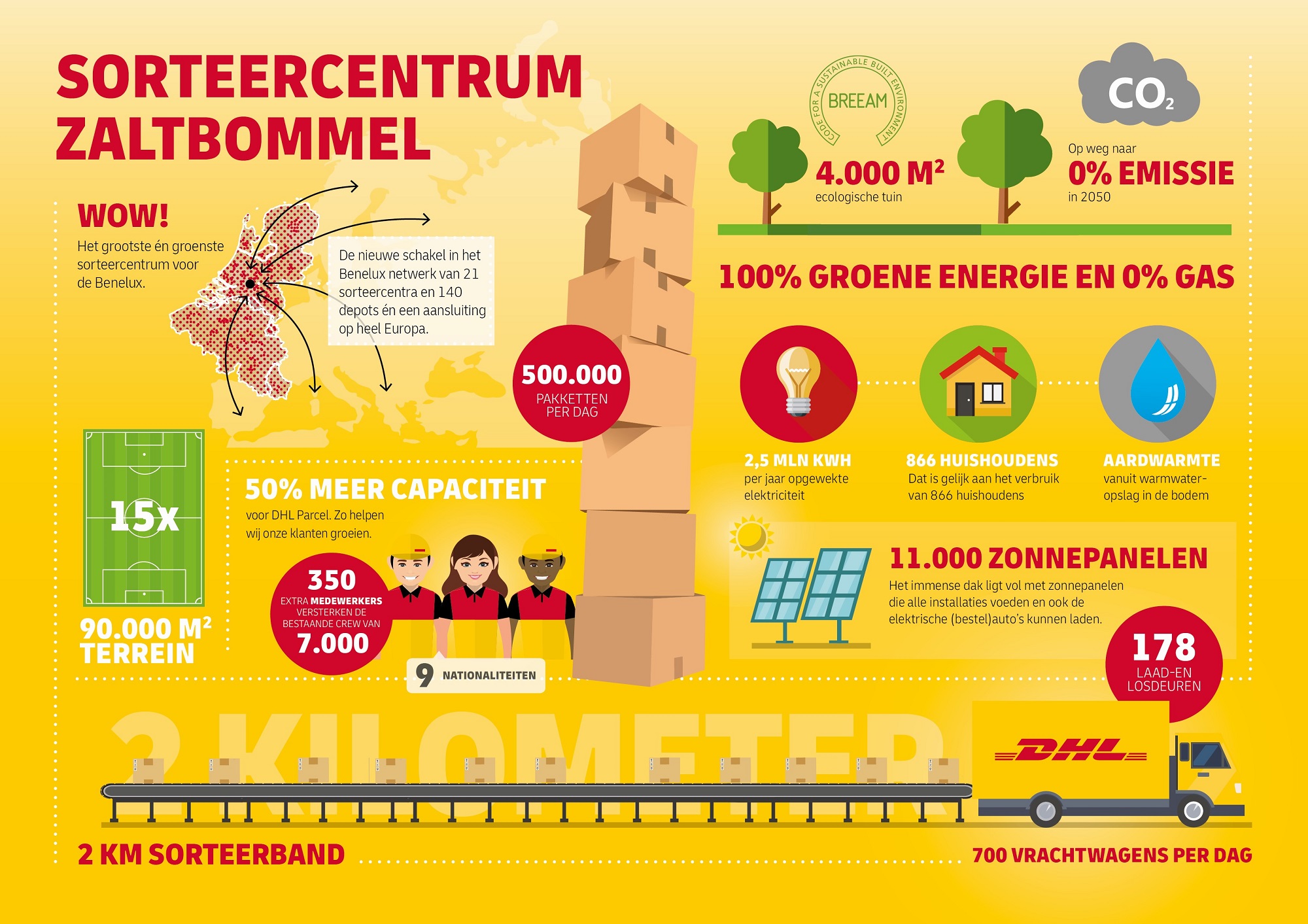 The opening was performed by Ken Allen, Member of the Board of the DPDHL Group and Wouter van Benten, CEO of DHL Parcel Benelux. The construction and furnishing involves an investment of 84 million euros. The building, which covers 30,000 m2, stands on a site the size of 15 football pitches and was built by Hercuton. The sorting installation is owned by Vanderlande Industries. It is the most modern of its kind, with a band of more than 2 kilometers in length that runs over two floors. Every day, 500,000 packages can be sorted by 240 destinations. Tens of kilometres of wiring also ensure the transport of all data that accompanies the sorting process. With, among other things, 11,000 solar panels, geothermal energy, use of rainwater and an ecological garden of 4,000 m2, the building meets the BREEAM Excellent standard for sustainable buildings. 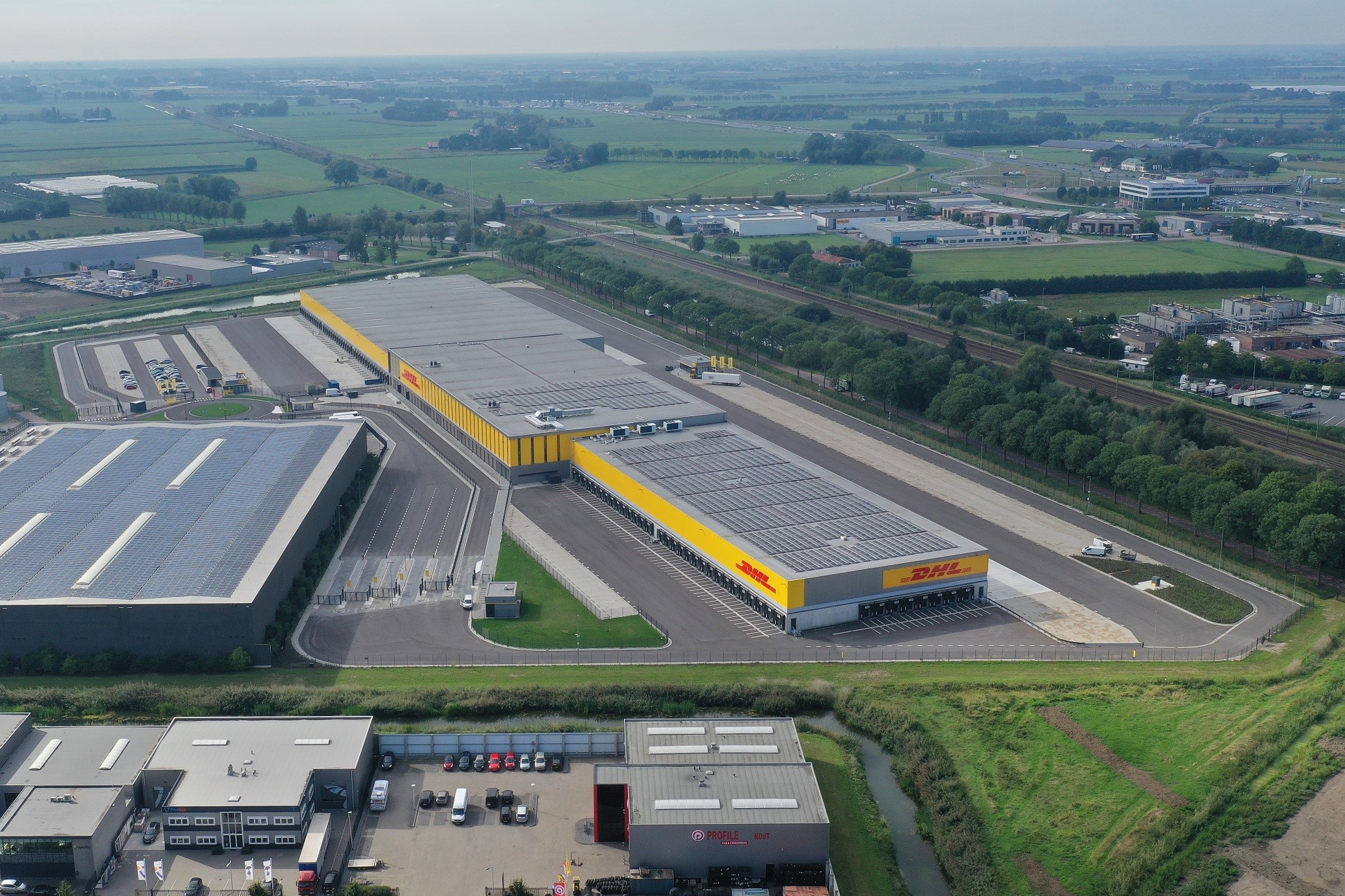 The DHL Parcel Hub Zaltbommel will employ 350 people. This is an expansion of dhl parcel's existing number of 7,000 jobs in the Benelux, partly because the current sorting centre in Den Bosch will also remain open. Previous plans to merge this location entirely into Hub Zaltbommel have been put aside, because that capacity also remains necessary. The expansion is part of a multi-year, large-scale investment plan.

WE INVEST TO FACILITATE OUR GROWTH, BUT ALSO TO EXPAND OUR SERVICE LEVEL. DIGITIZATION PLAYS AN IMPORTANT ROLE IN THIS. IN ADDITION, THE NEW INSTALLATIONS HELP TO MAKE OUR PROCESSES MORE SUSTAINABLE;.
Wouter van Benten, CEO bij DHL Parcel Benelux

In addition to buildings, investments are being made in the fleet of residential-friendly smaller vans, including 300 electric ones. Furthermore, a lot is being invested in digitization, which makes processes more efficient and new shipping services can be introduced, where the sender and receiver have more influence on the shipping and delivery process, such as time slot delivery, evening delivery and in possibilities for the consumer to change the location and time of delivery during the delivery process.