The Netherlands at the forefront of further globalisation

The Netherlands is once again emerging as the most internationally connected country in the world. This is evident from the fifth edition of the DHL Global Connectedness Index (GCI) – a detailed analysis of globalisation, measured by international flows of trade, capital, information and people. Globalisation along international value chains is crucial for progress and development. Despite the trend of increasing anti-globalization in many countries, global connectedness experienced a new high, with a significant increase for the first time since 2007. Strong economic growth has strengthened international flows, while the effect of major policy changes, such as tariff increases in the US, is not yet visible.

The report was presented today by co-author Steven A. Altman of the New York University Stern School of Business at the Scheepvaartmuseum in Amsterdam. Ronald Leunisse, Managing Director of DHL Express in the Netherlands, said: "Of course, we have been proving for centuries what the result of open relationships is. Connectedness with the world is anchored in our thinking and is the driving force behind the success of the Netherlands as a trading nation and as an inclusive society." 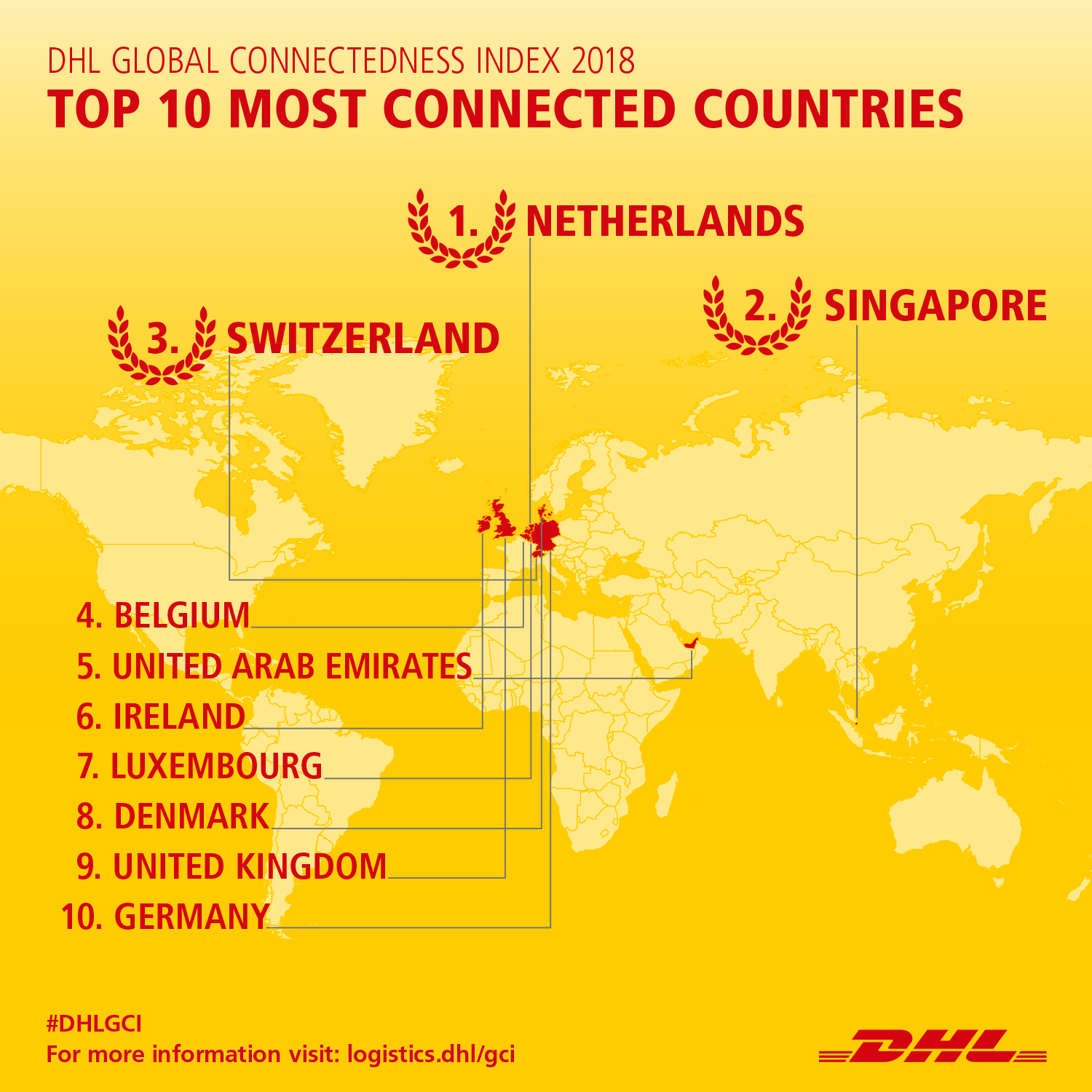 The 2018 index reflects the current degree of globalization with a world ranking, based on the depth, either the intensity and the breadth, or the geographical distribution of the international connections that countries have. The top five most connected countries are the Netherlands, Singapore, Switzerland, Belgium and the United Arab Emirates. Eight of the top 10 countries are in Europe, making it the most connected region, particularly for trade and people flows. North America, the leader in capital and information flows, is in second place, followed by the Middle East.

"Even as the world continues to globalize, there is still huge untapped potential around the world. The GCI shows that most of the movements and exchanges we see today are national rather than international, while globalisation is a decisive factor in growth and prosperity development," explains John Pearson, CEO of DHL Express. "Increasing international cooperation contributes to stability, so that companies and countries that embrace globalization benefit enormously."

SURPRISINGLY, THE WORLD IS STILL LESS CONNECTED THAN MOST PEOPLE THINK.
GCI co-author Steven A. Altman

People tend to be more concerned about international flows if they overestimate them. The facts in our report can help temper such fears and draw attention to real facts."

At the global level, for example, the GCI shows that only 20% of economic output is exported globally, that no more than about 7% of calling minutes (including internet calls) are international, and only 3% of people live outside their home country. The report also debunks the belief that distance no longer counts: most countries are much more connected to their neighbors than to distant lands.

The five countries where international flows exceed expectations are Cambodia, Malaysia, Mozambique, Singapore and Vietnam. Four of these top-five countries are located in Southeast Asia. Southeast Asian countries benefit from broader Asian supply chains they are part of and from asean policy initiatives that promote economic integration. This deeper connection to the world can accelerate their economic growth.

More about the GCI study

The report was commissioned by DHL and written by Steven A. Altman, Pankaj Ghemawat and Phillip Bastian of the New York University Stern School of Business and the IESE Business School. The 2018 DHL Global Connectedness Index is based on more than 3 million data from international flows for trade, capital, information and people. It documents and dissects levels of globalization, both at the global level and for 169 countries and territories that together account for 99% of the world's GDP and 97% of its population. The report and additional background information can be downloaded at logistics.dhl/gci.