Today DHL Parcel opened a new sorting centre for parcels at the Atlaspark in Amsterdam Westpoort. The sorting centre will replace the current terminal on the same business park. With the new centre, the capacity has been expanded and the installations have been improved, so that more and better sorting can be done. 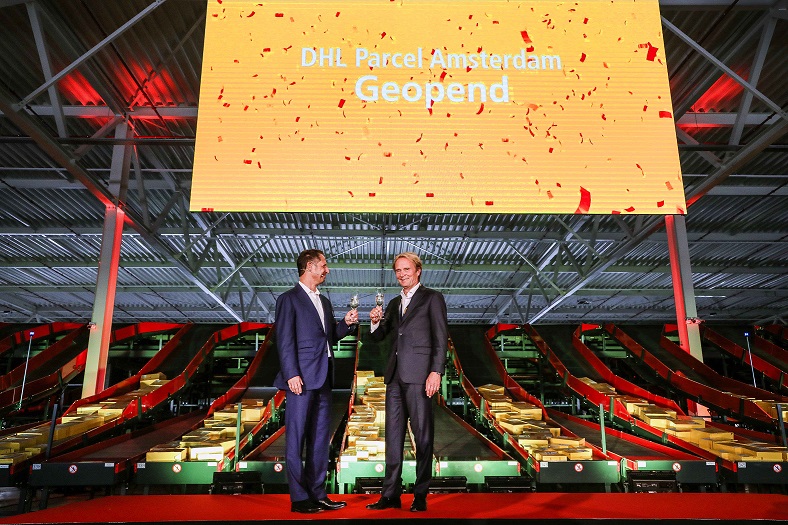 The opening was performed by Achim Dünnwald, chairman of the management board of DHL Parcel and Wouter van Benten, CEO of DHL Parcel Benelux. The construction and furnishing involves an investment of a total of more than 35 million euros. The building was developed by WDP and built by Aan de Stegge Twello. The sorting installation is from Vanderlande. With, among other things, 4,700 solar panels, the building meets the BREEAM Excellent standard for sustainable buildings. Watch the video of the construction of the sorting centre.

Part of a European e-commerce network

The investment is prompted by the tremendous growth that DHL Parcel is experiencing as the second largest carrier in e-commerce. In addition, the company is the market leader in the business-to-business segment. The Amsterdam branch is one of the 15 sorting centres in the Netherlands, which together with the 6 centres in Belgium form a Benelux-wide network. Together with similar networks in the most important European countries, a united European parcel network is thus formed.

WITH THE GROWTH OF CROSS-BORDER E-COMMERCE TRAFFIC, THE IMPORTANCE OF A WELL-FUNCTIONING, TRANSPARENT AND AFFORDABLE EUROPEAN PARCEL NETWORK IS INCREASING
Achim Dünnwald

At the Amsterdam site, around 250 employees will be involved in the supply, removal and delivery of parcels. In total, DHL Parcel employs approximately 6,500 people in the Netherlands.

The new building in Amsterdam is part of a multi-year, large-scale investment plan. This year, 40 million euros have already been invested and in the next two years that amount will exceed 150 million. In addition to buildings, it concerns investments in the fleet with residential-friendly smaller vans, including especially many electric ones. Furthermore, the investments concern the expansion of shipping services in which IT innovations play an important role. The number of DHL ServicePoints is expanding, to more than 2,100 pick-up and drop-off locations. This includes parcel lockers where consumers can pick up or drop off packages with a PIN code. Furthermore, investments have been made in services such as period delivery, evening delivery and in possibilities for the consumer to change the location and time of delivery during the delivery process. Fast and economical deliveries from consumer to consumer, with connection to Deutsche Post's worldwide parcel network, are now also possible.

In terms of technology, the centre is equipped with a Vanderlande sorting installation with a capacity of 12,000 parcels per hour, with the possibility of further expanding it. In terms of sustainability, the building meets the BREEAM Excellent standard for sustainable buildings. To this end, there are, among other things, 4,700 solar panels on the roof, which provide 80% of the required electricity. There are also extensive facilities for charging electric trucks and vans.